When I worked for a living I started early on, signing all documents ‘JGP’. It always sounded better to me than ‘John Platt’.

‘John Platt’ is one of these forename/surname combinations that only has, in its birth certificate state, two syllables. Quite unusual. For example, the name Ben Brown counts as four syllables because, unless you were registered as ‘Ben’, you’re really ‘Benjamin’. Over the years I noticed this phenomenon. To make matters even worse, ‘ John’ and ‘Platt’ are both harsh words, whereas ‘Brown’ is a ‘softer’ word. I used to say that my name was a bit like ‘dog muck’, two single syllables, each a harsh sounding word. Hence my use of JGP. It was also quicker and easier to write/type!

You will see from other parts of my websites that I am an aficionado of Horological matters – I like clock and watches. When I retired in 2003, I thought ‘I’d like my own ‘brand’ of watch’. So in September 2006 I went to the Hong Kong Clock and Watch Fair and toured the sellers’ stands asking what it would cost to have a watch branded ‘JGP’.

The only criteria were it had to look good and be cheap. To get anywhere near these two givens, I had to buy in bulk.

After some negotiation, I struck a deal with Gold Rush International Enterprise Ltd to buy 500, and, having paid them a deposit at the Fair, they set about making them. They were delivered to my house in the UK in December 2006.

When I received them I set down my only rule for them. “I would never sell one”. I would give them away to friends, family, acquaintances. I gave a number to each of my children and told them to give them to people they knew. By the middle of 2008 I had disposed of most of them so I went back to Hong Kong in September 2008 and bought another 500 from the same company. They had changed their name to TNG Global Limited. The new batch, outwardly, was the same as the first but had a different movement. I carried on giving these away.

The buying experience on both occasions was superb. Everything was done over the internet – they photographed me samples of straps, dials, cases and together we came up the ‘JGP’ watch. 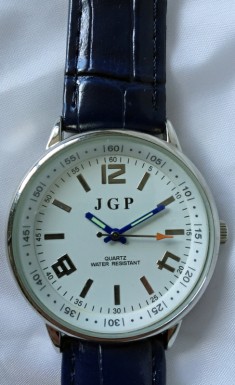 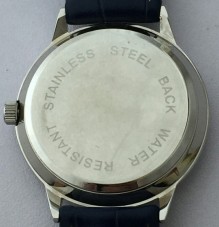 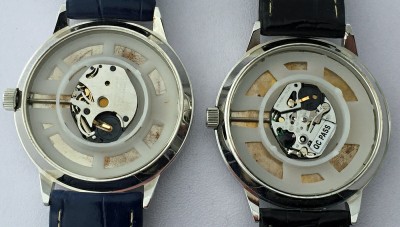